About the Photography of Mark Polege

If there was ever someone whose photographic technique and approach was born in black and white, it would be Mark Polege. Though he had learned the mechanics of 35mm photography during his free time in a St. Louis high school in the mid-1980’s, it did not take on an artistic fever pitch until his move to rural North Dakota in the winter of 1998.

Being raised near the gothic campus of St. Louis’ Concordia Seminary in the mid to late 1980’s, Mark developed a fond appreciation for architecture. Years later, this resulted in his gravitating toward architectural subjects as well with his very early photograph named “Arches.”

In the rugged terrain of southeastern North Dakota, he found the work of Ansel Adams quite inspiring. In Mark’s black and whites, where Adam’s photographs seem to work to conceal the subject’s place in time and history, photographs he captures work to conceal the exact measure of time that has past the subject, leaving an almost apocalyptic view of a world long past.

His black and white subjects tend to be constructed of raw materials like metal, wood, glass, and stone. His post-production has been the process of enhancing the high contrast he naturally finds in his subjects and in their lighting. This high contrast accentuates the subject’s texture, lighting, and shadow, creating bold, dynamic emotion with each stunning image. Mark’s compositions seek to tell a story for subjects forgotten, overlooked, or beaten by time and the elements; in a sense a reminder of things we once were.

With Mark’s return to the St. Louis area in 2004, his focus was still mostly photographing in black and white film. Shortly after arriving back, he made the transition to digital, while capturing more industrial rather than rural subjects and still mostly in black and whites. During this time, Mark also completed his Bachelor of Fine Arts degree in Digital Design, during a 2-year stint working as a Photo Editor for the Belleville News-Democrat in Belleville, IL. It is here where he learned and perfected his technique in color correction.

It was not until he began working as a photojournalist for the Edwardsville (IL) Intelligencer newspaper in the fall of 2011 that his artistic photography more prominently took on a colorful hue. For the next 2 years, the experience he gained in assignment photography helped him perfect not only the story he was telling with his images, but also translating his brilliant compositions into vivid and illustrious color.

Mark’s photographic artwork is an exploration in perspective and depth, and a story written in a tapestry of light. His pieces capture the past while harnessing color and composition into timeless moments.

Though I had become familiar with the mechanics of 35mm photography &  film development after being handed a camera in high school in the  mid-1980’s, it was not until 1998 that I really began to see the world differently through the lens. In March of that year I relocated to southeastern North Dakota.

Even though I desperately missed St. Louis, my natural instinct to explore took over and I began to just drive…ANYWHERE. In my driving of the chalk-line highways and exploring, I began to learn that, unlike some states, North Dakota history fades and deteriorates in the open spaces. This never became more true for me than when I came across an abandoned, windowless house along a highway. I parked the car and explored it. Walking through that house, I could not stop imagining what that house, that yard, must have looked like in its prime…when the paint was fresh and the yard was green, before the North Dakota tall grass took over. 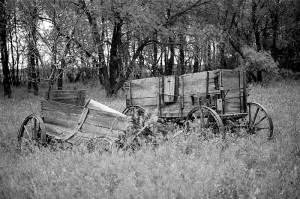 Recognizing the fact that not all history is grand and glorious, but that history in the smallest and most forgotten places is important, and maybe more so out there because it was fading unbeknownst to anyone. My traveler’s instinct always kept my camera with me, so I recorded my find, less like an artist and more like an archeologist; trying to learn clues about the people who lived there. Finding this house, captured in the photograph “Window to the Past,” drove me to look for other places forgotten and left to the harsh North Dakota elements.

A barn here, another house there. They were usually concealed by groups of trees, grown as a windbreak to the relentless North Dakota winds. One time I found a pair of wooden wagons completely concealed from the highway by the tall grass. There they were, quietly dilapidating, captured in the photo “Wagons Rest.”

Then one day I found the largest abandoned farm I had found in the 6 years I lived there. The property contained 3 houses, barns, tractors, equipment. And far behind it was a swamp with a dozen old cars and trucks from around the 1950’s, all in various degrees of parts cannibalization. Discovering this place, at first, felt more like a historical find. Somewhere along the way, it changed from historical record into artistic appreciation. I rarely repositioned anything I found, and learned to see the beauty of placement in the random arrangements by chance and weather.

Shooting black & whites have been a very important part of my photography, allowing me to focus more on perfecting my composition and exposure to tell the story in the image. Most of what I learned about photography was self-taught with years of trial-and-error, mostly recording my exposure settings in a notebook to compare with the film and prints later. My education in Design has taught me the importance of select uses of color, while my newspaper experience has taught me the great value of accurate color usage. Though I have began producing more color in the last few years, my draw to shooting and producing my black & whites will not end anytime soon. 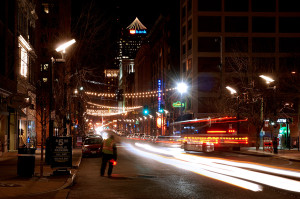 I owe much of my perception of composition to my North Dakota days, along with my strong exploration of angles and the belief that almost anything can become a subject of appreciation, no matter how small or overlooked. Because of that, my subjects are not limited to any one element, style, or perspective. Photographs that move and captivate me draw me in so deeply that I cannot look away for fear of missing something. This becomes the goal that I set, either consciously or unconsciously, for my own work. Chemistry teaches that life is a moving target, no matter how small, mundane, or forgotten. The beauty of life can be found in places we may least expect. It is that beauty I seek to capture.